Glaucoma remains a major cause of blindness and several newer approaches are adopted to prevent loss of vision. Medical management, surgical procedures and newer devices are tried to reduce the intraocular pressure. But in spite of control of intra ocular pressure, progression of field defect and loss of vision still remains a challenge. We have tried citicoline in different forms and reversed the field loss, which has been considered hitherto as an impossible one. Several research papers are from Italian authors. We report our experience in this challenging task.

To study the reversal of field defects in glaucoma by citicoline.

Glaucoma remains as the major cause of blindness in many countries of the world.  It is a neurodegenerative disease in which increasing intraocular pressure leads to the progressive loss of retinal ganglion cells and irreversible visual impairment.  The loss of vision is through a progressive field loss, ultimately leading to a total loss of vision. Citicoline administered as tablets, intramuscular and intravenous injections has been documented for its neuroprotective role1, 2. Citicoline given orally also improves visual evoked potential in some glaucoma patients3 .

Patients with different types of field defects already treated by medical as well as by surgical management were supplemented with citicoline and results reported .With the advent of citicoline and its effect in glaucomatous patients, the very concept of dysfunction of visual pathway in addition to damage to Ganglion cells of retinal layer is being established.

Patients with glaucoma diagnosed or already treated, who underwent this treatment and are coming for regular follow up are reported in this brief communication. Citicoline was administered intravenously, diluted in Ringer lactate solution. Depending on the severity of field loss, three to ten injections (250mg/2ml) were given followed by tablet (500mg) once daily for a period of three months with periodical enhancement of the drug when needed. The improvement in the acuity and field of vision was recorded both objectively and subjectively. We have been using this drug for more than six years with successful outcome.

By slit lamp examination the central cornea was observed to be thin with keratoglobus in both eyes more in right eye. Fundi revealed 90% cupping of the optic disc. He also had filtering bleb after trabeculectomy in both eyes.

The patient also had undergone cardiac surgery for ventricular septal defect. The conjunctiva was muddy. Bitot spot was seen in both eyes. As recorded on 5.1.2015 he had bi-arcuate scotoma (Fig. 5 and 6) He was already taking tablet iopar and using Dorzox-T along with Auroprost eye drops. The treatment commenced on 7.1.2015 with intravenous injections of citicoline for three consecutive days. After 5 days (10.1.2015) of treatment the patient was reviewed; there was a significant improvement in the field as well as acuity of vision. He was further administered citicoline once in a month. There was gradual regression of filed defects (Fig. 7 and 8) Final recording performed on 12.3.2016 revealed normal fields and improvement in visual acuity also. The boy who had discontinued his studies, had rejoined school after treatment and is now successfully continuing his studies in diploma in engineering.

In glaucoma management there are no hard and fast rules that define what determines visual field loss. The different patterns of field loss in glaucoma can be Arcuate or Bjerrum Scotoma, nasal step, altitudinal defect and generalized depression. Though it is believed that the ganglion cells of retina are the target of increased intra-ocular pressure and degeneration is irreversible, currently the concept is changing with the use of Citicoline, a neuro-protectant used originally in the management of strokes4. Citicoline is approved in Europe and Japan for use in stroke, head injuries and other neurological disorders.5

The duration of oral or intramuscular administration of citicoline in the management of stroke extend for varying periods even up to 9 years.  The extension of citicoline treatment up to a period of 8 years may lead to the stabilization or improvement of the glaucomatous visual dysfunction 1. Now it is being proved that glaucomatous neuronal damage starts with ganglion cells of retina spreading to the lateral geniculate body. Citicoline may induce an improvement of the retinal and of the visual pathway function in patients with glaucoma 4. In this regard this report documents that citicoline therapy enhances vision and fields by its neuro-protective effect. Topical citicoline also seems to have a neuroprotective action6

In the management of glaucoma, it is not sufficient to control the intra-ocular pressure alone, but there is also a need to retain the normal fields as well as reverse the field loss in whatever stage the patients may report.  Hence in spite of the procedures adopted for lowering of intra-ocular pressure like medications, surgical interventions, laser procedures or placement of devices of different kinds, it is of paramount importance to prevent field loss by neuro-protection. In this context citcoline has been found to have a significant effect. Though we have successfully treated several cases with different variety of field defects showing clinical improvement in vision, patients managed with proper follow up only are reported.

We also thank Mr. B. Athikannan of G.K.S.Computers for his secretarial assistance 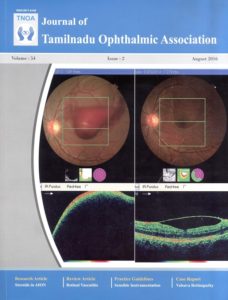 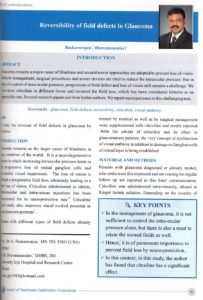 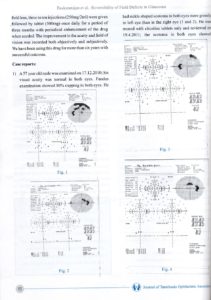 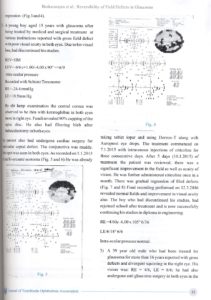 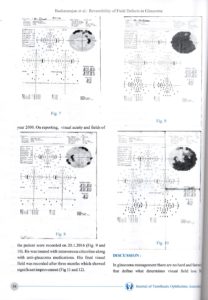 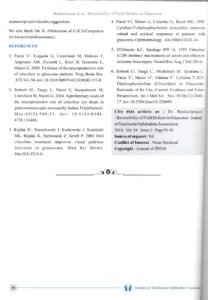